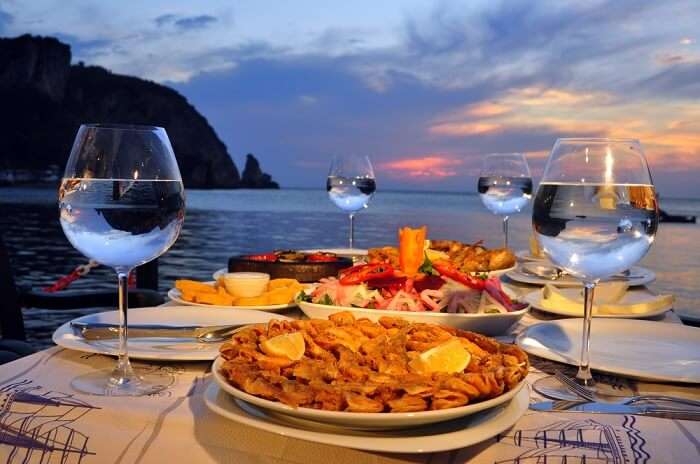 Eateries of Turkey – A fabulous tradition

Ever thought what makes Turkey so unique? It is that there is no need for you to order your entire meal at once. You have the chance to order two-three dishes and then see if you’d like to eat more.

In the Turkish tradition, Turks usually prefer a rich breakfast which is a large continuation of the Ottoman cuisine.

Every country is known to have its own picky delicacies that make them unique and drive people to come and try them. Here’s a list of few eateries of Turkey that complete the Turkish tradition.

1. Turkish Delight
• The locals call this Lokum, is something you might have never tried before.
• It is a combination of chopped dates, pistachios, hazelnuts which come in various colors and flavors to suit any taste bud.

2. Iskender Kebab
• Do not leave Turkey without trying one of the best and the most popular dish of Turkey – Iskender Kebab.
• It consists of thinly sliced lamb that is served with traditional Turkish bread, which is heavily topped with yogurt and butter.

3. Manti
• Something known as The Turkish Ravioli, can make any pasta-lover go crazy. Surprisingly, Turkey has its own version of Ravioli which is tempting!
• They’re a small handmade dumplings filled with lamb or beef served with creamy yogurt.

4. Baklava
• Too sweet, and even more richer is the famous Turkey dessert – Baklava.
• Layers of flaky pastry that is finely chopped with nuts.
• Originated from the Ottoman Empire, this dish is now widely sold on every street of Turkey. It is taste scrumptious.

5. Mezze
• You cannot probably leave any Turkish restaurant without being served Mezze.
• It is a small selection of dishes that is served with drink, probably before or after a meal.
• It merely consists of yogurt, herbs, hummus, vine leaves, meatballs, eggplant salad and white cheese. It is nothing, but eye-satisfying and mouth-wateringly delicious.

6. Shish Kebab
• A classic meal, which could be found on the menus of any Turkish restaurant.
• Served with a skewer (chicken, meat or beef) along with rice and french-fries and salad.
• It may be just simple, but taste like heaven.

7. Gozleme
• What’s a country without no fast food? Nothing.
• Gozleme is probably the easiest fast food you’ll find across the country.
• It is too similar to a crepe, is a flatbread which is filled with cheese, meat, vegetables and potatoes. Something, you will surely not regret.

8. Kumpir (The carb loaded goodness)
• For all the potato lovers, Kumpir is a freshly baked potato dish. You might have tried many baked potato dishes but this one’s epic.
• It is mixed with a pile of cheese and butter. You also have various options to have it with yogurt, ketchup, sweetcorn or sausages, olives or Italian salads – just to name a few.

9. Turkish Apple Tea
• A tea that will tickle your taste buds forever.
• Luckily, there is no shortage of this sweet nectar and is available in every Turk café, restaurant or any Turks house you visit. It is a part of the Turkish tradition.

10. Dondurma
• The Turkish Ice Cream which looks like a normal ice cream and may even taste like a normal one, but isn’t it normal.
• A bizarre texture of an ice cream which doesn’t melt is what makes this ice cream unique with an impact of chewiness.
• If this doesn’t impress you, then the Dondurma vendors are known to put up spectacular shows, while playing with the ice cream scoops and luring the customers.

11. Simit
• A popular Turkish street food that is a fusion of a pretzel and a bagel.
• The cheapest snack you’ll find on Turk streets and can be eaten.
• Typically, a bread that is encrusted with sesame seeds and can be eaten either plain or with jams, cheese or Nutella.

12. Etli Ekmek
• No, you don’t have to imagine life without pizzas in Turkey. If you’re a pizza lover, Turkey is sorted.
• Etli Ekmek is a pizza dish that is originated from a town called Konya.
• An extremely long flat sliced bread topped with meat and cheese and toppings is what sums up Etli Ekmek or The Turkish Pizza.